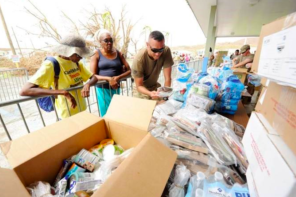 In the wake of Hurricanes Irma, Maria, and Harvey, we have seen that institutional and government responses consistently fail to meet the needs of those most directly impacted by climate disaster. Cooperatives, on the other hand, have a history of providing much-needed support and infrastructure in the wake of climate disaster. The folks who make up the solidarity economy in New York City come from communities hardest hit by climate change and thus are often sites of regeneration and climate innovation. We are accustomed to listening and meeting real, rather than imposed or cultivated needs. After Hurricane Sandy hit, worker-owned cooperatives were developed to put the neighborhoods most affected back together.

It is no surprise, then, that our members are moving resources into on-the-ground, grassroots-led forms of relief in Puerto Rico, Mexico, and Texas. Check out where Caracol Language Coop is sending donations, support community-driven and highly localized relief efforts for Hurricane Maria and Irma, and give to cooperatives putting in immense work to uplift devastated communities in Texas.