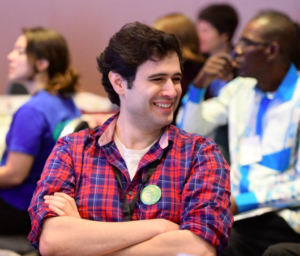 This #CoopMonth, cooperators from around the world joined each other for the National Cooperative Business Association’s Coop IMPACT Conference in Arlington, Virginia.

CEANYC Staff had the opportunity to participate in a youth-focused cohort: The Cooperative Leaders and Scholars Institute (CLSI). CLSI offers scholarships and programming to cooperators under 35 from around the country and across sectors. We came from food co-ops on the west coast, credit unions in the nation’s capitol, cooperative economy graduate programs, nationwide worker cooperative support networks, and more.

The CSLI kicked off with a cohort dinner where young cooperators got to meet each other and hear from NCBA Board Member and U.S. Federation of Worker Cooperatives Executive Director Esteban Kelly. Kelly talked about his co-op origin story, chronicling his background in community organizing work in New York and his involvement with the Berkeley Student Cooperative, where students not only lived cooperatively, but ran democratically-controlled businesses and groceries. In other words, where a cross-sectoral approach was foundational. The Berkeley Student Cooperative houses and feeds over 1300 university students. CSLI participants attended the regular conference, but also had special programming and networking events.

CEANYC Board Treasurer Evan Casper-Futterman joined the Executive Director of the Philadelphia Area Cooperative Alliance (PACA), Jamila Medley, for a workshop on place-based cross-sectoral solidarity economy organizing. PACA and CEANYC do similar work, organizing cooperators across sectors to build a base of people fighting for economic and racial justice. That being said, the two discussed shared challenges, e.g. sectoral isolation, lack of philanthropic and government support, generational turnover, and differing political orientation and strategies. However, they also shared emerging opportunities: the potential to connect economic justice and economic cooperation, connections and innovations for local and state policy, and more space for collective visioning and skill-building.

We enjoyed learning more from the folks at the Seward Community Co-op, the Chicago Solidarity Economy Law Clinic, and The Preston Model. Check out this piece by Noemi Giszpenc at the Cooperative Development Institute for more highlights!