Solidaritat: What Barcelona’s Social and Solidarity Economy Means for NYC 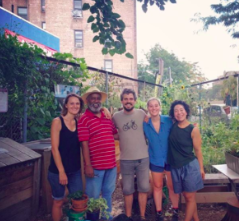 Solidaritat: What Barcelona’s Social and Solidarity Economy Means for NYC

At the end of June, activists from Mexico, the United States, and Canada gathered at the Fearless Cities Conference—North America’s first ever municipalist summit—to discuss local strategies to build a more just, democratic, and inclusive economy from the ground up. CEANYC participated in the Solidarity Economy track, exchanging with and learning from cooperators around the world, including Laurent Levesque of Montreal’s Chantier and Alvaro Porro, Barcelona’s new Commissioner of Social Economy (yes, this is a government position that exists in Barcelona!). We are honored to have gotten to spend extended time learning more about Barcelona’s solidarity economy, and are eager to share the information and lessons learned with our fellow New Yorkers.

Over the past four years, with the election of Ada Colau—the city’s first woman mayor—alongside several other activists, Barcelona has experienced a significant shift Left in their local governance. Many people who have spent their lives fighting economic inequality at the grassroots level—squatters, housing organizers, food justice activists—now hold government offices, leveraging the City’s resources to build a Social (or Solidarity) Economy. Barcelona has established a citywide agency devoted to strengthening collective ownership and democratic governance, something New Yorkers have been dreaming up for years. The new agency currently employs 22 people committed to working on social and solidarity economy growth (whereas there were previously 0), awards 16 million euros over a span of 4 years to solidarity economy groups on the ground, and allots 8 million euros for capital projects. The agency is working towards procurement as well as developing worker-owned businesses among Barcelona’s most marginalized.

In spending time with Porro and other New York groups invested in a citywide agency—New Economy Project, New York City Network of Worker Cooperatives, New York City Community Land Initiative—we got the chance to hear more about the solidarity economy landscape in Barcelona and how the office functions. This information is not only exciting, but also useful in reflecting on the landscape of NYC considering the scale of Barcelona’s social economy: 1,197 worker-owned enterprises, 861 cooperatives, 260 community-economic initiatives, and 2,400 third social sector (similar to non-profits) organizations. The cooperatives exist in all sectors and work towards the transformative aim of democratic and participatory management, orientation towards people’s needs, and commitment to the community.

Here are some key takeaways:

Here are some questions that remain:

Thank you to Movement Net Lab for organizing Fearless Cities, and to New Economy Project for hosting Alvaro Porro! For more information, check out Barcelona’s Impetus Plan for the Social and Solidarity Economy, this piece on municipalism in Spain from Rosa Luxemberg, and Masha Gessen’s recent New Yorker article on radical democracy in Spain.