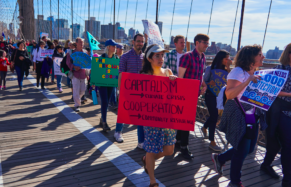 Five years ago, Superstorm Sandy blasted our city, leaving tens of thousands of people homeless. As a result, communities—primarily those comprised of low income New Yorkers of color—were devastated. As we saw in Sandy and Katrina, and have seen again with Irma, Maria, and Harvey, institutional support fails to keep our cities safe and rebuild the lives of those on the frontlines. Cooperatives—like housing cooperatives and community land trusts, food cooperatives, worker-owned cooperatives, community gardens, and housing cooperatives—on the other hand, have a history of immense resilience and support. It is community-owned and community-governed land and property that will provide people (us) necessary relief in the wake of disaster

We know that climate change makes storms like Sandy more violent and intense, and we know that fossil fuels and an economy rooted in extraction and environmental racism are to blame. Disasters like Sandy will get worse as long as our elected officials keep supporting profit over people, whether it happens through fossil fuel extraction or luxury development on our city’s waterfront, and our most vulnerable communities will be the ones who suffer most. The people hit hardest by climatechange are the poor, people of color, immigrants, and otherwise vulnerable communities.

This is why in October, we came together to say: that’s not who we are. In New York City we stand up for each other. That means every politician in New York, from the city to the federal level, must go beyond lip service and act on climate now. Cooperators from across sectors came out to Cadman Plaza and marched across the Brooklyn Bridge demanding a New York City and a world that prioritized ecological sustainability and community over profit!