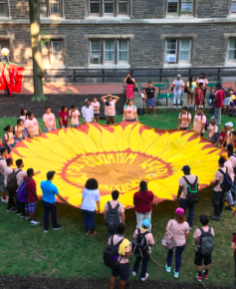 The climate summit, the largest gathering of youth of color on climate change in the country, held workshops on urban gardening, gentrification, climate refugees, policing, and other topics relevant to climate change and its distinct and disproportionate impact on communities of color in New York and around the world. In New York City, communities of color—primarily Harlem and the South Bronx—manage more than 30% of the city’s waste and process up to 70% of its sewage sludge. As a result, asthma rates are significantly higher in communities of color, endangering children and elderly in neighborhoods of color. While the city ushers in band-aid solutions or promotes purportedly progressive initiatives like solar energy and white-painted roofs, it simultaneously works to uproot the health and lives of New Yorkers of color. Prioritizing luxury development and gentrification over green space, New York neglects its community gardens, which serve as a means of self-determination for many of New York’s most marginalized communities. Failing to incorporate Fair Labor Standards to the green jobs created, laboring New Yorkers are vulnerable to the same worker exploitation that exists in extractive jobs. At the same time, measures of promoting sustainability, like collecting recyclables, are criminalized and heavily policed in communities of color. There are only some examples of environmental racism in New York that speak to the need for and value of youth of color organizing around climate justice, and this summit is a powerful way to put youth voices together in the same room to connect, collaborate, and strategize.

Panelists featured water protectors, organizers from Cooperation Jackson, and Oakland-based organizers, while UPROSE BK staff and members held a fashion show called ‘culture, not consumption.’ While the summit in the past has been mostly about New York-based youth-driven environmental justice organizing, this year’s summit pulled young activists from around the country. Danny Glover was the keynote speaker, encouraging youth of color to take leadership in protecting the environment, their respective communities, and shifting the culture of the United States from one of extraction to one of cooperation.