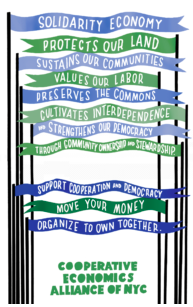 We are so g

rateful to Josh MacPhee—a Brooklyn based artist, activist, and archivist—for designing our poster! Josh is a founding member of JustSeeds Artists’ Cooperative as well as Interference Archive. JustSeeds is a collection of social justice-oriented printmakers from the United States, Canada, and Mexico who collaborate to offer graphics, installations, wheatpasting, and other forms of creative support to grassroots efforts doing progressive work. As a thirty-person collective, JustSeeds collaborators do not only support the work of other organizing communities, but build off of each other. Meanwhile Interference Archive—a social movement archive based in Gowanus, Brooklyn—is collectively managed by over one hundred volunteer-staffers. The archive contains everything from posters to zines to theory, while the volunteers work to put on exhibitions and produce publications. Aside from these specific events and releases, the archive is open to the public every Thursday to Sunday.

Josh, an Oberlin graduate, has also played an integral role in developing the Celebrate People’s History Poster Series—a series of posters celebrating the legacy of radical political figures, actions, and movements (many of which are available for sale at Bluestockings)—as well as Street Art Workers and more recently (in the wake of the 2016 U.S. presidential election), Inaugurating Resistance. Josh is the author and editor of different publications, most notably Signal: A Journal of International Political Graphics and Culture.