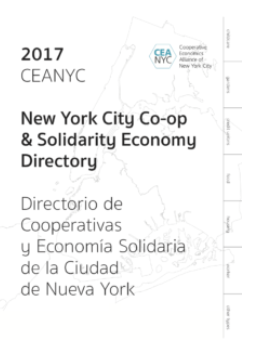 In times of crisis and corruption, we continue to see which solutions work—repair homes, sustain food sources, create jobs, save lives—and which ones do not. When Hurricane Sandy hit New York City in 2012, we were reminded that cooperation in the form of community self-organization and networks of solidarity kept the death count low while large non-profit organizations, corporations, and government support failed to make long-term and effective change. People share, barter, crowdsource, and sacrifice in order to replenish what has been taken from them and maintain what little they may have. Such collaboration has been and will be our greatest strength in the face of other inevitable natural disasters, increased militarization, police brutality, gentrification, and economic crisis. While the resilience and power of a people united is most visible in times of catastrophe, these networks of inter- and cross- community support are operating every day around the world, including here in New York City.

Yet, the solidarity economy, despite its rich and diverse history as well as intuitive logic, remains an ‘alternative’ to our dominant system: extractive capitalism. In order to figure out why this was the case and how to go about fostering a thriving solidarity economy, a group of volunteers of different backgrounds collaborating through the Deep Listening and Movement Building Project of SolidarityNYC met with participants of the solidarity economy across sectors to assess the challenges and to begin to answer the question: what will we build together? The result: a comprehensive report on what the solidarity economy wants and needs, and then a community-led steering committee (with leaders from NYC Network of Worker Cooperatives, The Working World, NYC Community Garden Coalition, New Economy Project, Lower East Side People’s Federal Credit Union, Black Women’s Blueprint, WHEELS Collective, and SolidarityNYC) who founded the network to achieve it.

One of a couple of consistent needs expressed among groups was a growth of visibility. While it is essential for solidarity economy participants to share stories, challenges, and successes with each other, the first step is to make sure groups (and especially groups across sectors) know where to find each other. Knowing what the cooperative landscape is in New York City, different groups can unite, share resources and knowledge, and build together. El pueblo, unido, jamás será vencido.

It is this desire, need, and truth that has led to the creation of this directory: a bilingual guide of the over 2000 different solidarity economy groups currently operating in New York City. It is our hope that, as a cooperator or consumer, you will use it to make connections, create value chains, and support democratic work, living, and growing spaces in order to resist the system put upon us and collectively build towards the future we all deserve. Another world is not only possible—it is already here. Grab your directory today!